Abstraction or data abstraction in computer programming is the process that hides all but the relevant data about an “object” in order to reduce complexity and increase efficiency. It works in a way to represent the object with unwanted detail omitted. Abstraction is one of three principles of object-oriented programming and is related to both encapsulation and data hiding. This article will provide an overview of

Account abstraction in Ethereum has the goal of creating a single account type that will have all the relevant aspects included and none of the extraneous ones making the developers life easier. 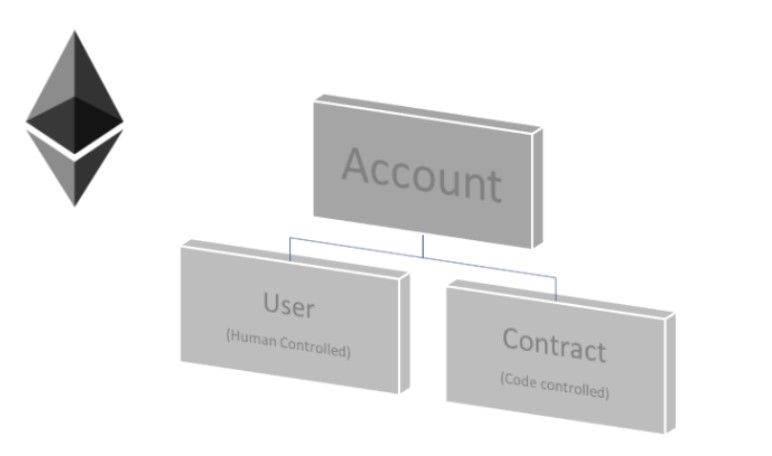 Currently, on Ethereum blockchain there are two types of accounts -

Contract is set of instructions and is controlled by code.

If you send 1 ETH to the account that is controlled by contract of code then, no person controls that any more. The only thing that can move that ETH is the execution of contract is code itself.

Both account forms include the potential to receive, keep and transmit ETH and tokens as well as Communicate with other smart contracts deployed on the network.

Ethereum Account Abstraction (AA) is an enhancement to make these two forms of accounts more comparable and to make external account management logic as versatile as contract accounts.

The goal is to reduce the contract account from two forms of accounts to one. The functionalities of the single account form include coin and contract transfers. Developer and customer will no longer need to differentiate between the account type, since the transaction will be entirely transferred to the EVM and out of the blockchain protocol.

Ethereum devs have been looking into methods of implementation and still there is no proposal in Final status. In the following section, we will have an overview of three Ethereum Improvement Proposals proposed for Account Abstraction till date.

According to "Simple Summary", the EIP-86 proposed to implements a set of changes that serve the combined purpose of “abstracting out” signature verification and nonce checking, allowing users to create “account contracts” that perform any desired signature/nonce checks instead of using the mechanism that is currently hard-coded into transaction processing.

The goal was to prepare an account security abstraction. It included changes to abstract out signature verification and nonce checking and allowing users to establish account contracts that conduct any required signature/nonce checks rather than relying on the traditional method.

Traditional Model: ECDSA and the default nonce scheme are the only way to secure an account.

New Model: All accounts are contracts, contracts can pay for gas, and users are free to define their security model.

With an example of forwarding contract, the author Vitalik Buterin explained that this contract verifies the signature, and if it is valid, it initiates a payment to the miner and then sends a call to the specified address with the given value and data.

_Forward Contract is a contract between 2 parties to buy or sell an asset at a specified price on a future date._

The main advantages of this proposal as suggested are:

As per simple summary of the proposal-2938, "Account abstraction (AA) allows a contract to be the top-level account that pays fees and starts transaction execution."

This is a Core proposal requesting changes to the Ethereum client consensus. Expected changes are:

Sam Wilson, one of the authors of the proposal explained how an AA transaction differs from a traditional transaction here.

In AA transactions, there is no gas price or limit, no value to send, no signature fields, and target in place of to. In the multisig contract, these fields are delivered in the calldata and processed by the contract.

Block Propagation is the average amount of time required for a new block to reach the majority of nodes in the network.

When the block with the AA transaction comes, any pending transactions for the same account are dropped. Traditional transactions, on the other hand, are revalidated and probably published when a new block is received.

This is the latest proposal by Vitalik Buterin & community. It is proposed as an ERC and this proposal includes changes to avoid consensus-layer protocol changes instead of relying on higher-layer infrastructure.

It aims to accomplish the following goals;

How does this work?

The working of the proposal is well explained by Vitalik Buterin here.

This is the most recent proposal for account abstraction, waiting to be merged to become an EIP. This design add, maintain and sacrifice some features compared to the regular Ethereum transaction mempool.

There is an implementation in progress here.

Security consideration: Contract Wallets are exposed to security risk from vulnerable smart contracts if there is a bug in smart contract coding. This risk can be minimized by security testing and reviews done by the wallet provider. However, in EOA wallets, risk is entirely on the wallet user as if the user loses its private key by mistake.

An Ethereum blockchain user needs an EOA with gas to connect with them or rely on the wallet provider to facilitate meta-transactions through the provider's relays or third-party relay networks such as the Gas Station Network. While the former relies on ETH usually bought on centralized exchanges after KYC, the latter seeks to minimize on-board UX friction by moving the consumer's responsibility to relayers at an expense that is paid by the on-/off-chain wallet provider and/or the off-chain user.

Meta Transaction is a user transaction that contain message with some data signed by a person who wants to execute a transaction.

Relayer-based architectures have a few drawbacks:

Account Abstraction would allow smart contract wallets to accept gasless meta-transactions from users and pay for their gas without relying on the relay network. This base-layer capability would also dramatically boost the UX onboarding of such wallets without losing the decentralization assurances of Ethereum.

Transactions which involves the Company or any of its Subsidiaries.

Some of the use cases are:

This Proposal can support this use cases through a paymaster mechanism.

Let's consider the example of Tornado Cash as a Mixer to understand how we can use AA in DeFi Protocols.

This could be solved by a third-party relayer that verifies the ZK-SNARK and unspent status of the nullifier, publishes the transaction using their ETH to pay for gas and collects the fee back from the user from the Tornado Cash contract.

Solutions by Account Abstraction:
User can submit an AA transaction targeted at the TC contract, after which the ZK-SNARK verification and nullifier checking can be performed, and PAYGAS can be called immediately. This enables the withdrawer to pay for gas straight from the coins sent to their withdrawal address, eliminating the requirement for relayers or an on-chain link to their deposit address.

A new version of Uniswap can be created that permits transactions that directly target the Uniswap contract.

The goal with AA is to increase the gas efficiency of DeFi protocols by prohibiting transactions that do not fulfil high-level criteria like the presence of a matching order from being included on the chain.

In Traditional Model: Normal traders store their coins outside the Uniswap contract.

Arbitrage Traders are traders who take advantage of price differences in two or more markets, so they buy at low and sell at high at the same time.

Note: These examples are sighted as use case for EIP-2938, a proposal proposing core changes to consensus Mechanism and EIP-4337.

An early developer alpha version of proposal 4337 is expected to be coming soon. An audit is also expected to be conducted to confirm the scheme’s safety. The hope with the proposal is that developers should be able to start experimenting with account abstracted wallets soon.

Disclaimer: The information contained on this web page is for education purpose only. Readers are suggested to conduct their own research, review, analyze and verify the content before relying on them.

All you need to know about Altair: The Beacon Chain Upgrade

The Evolution of Ethereum Testnets